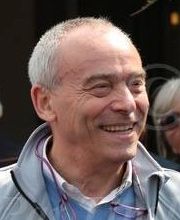 Carlo Farioli, is the current President of the IPPA, and since the founding of the IPPA in 2009, it is due to him the great spread and dissemination of P&P around the world.

As President of the Federazione Italiana de Pitch & Putt, he was a founder of the EPPA – European P&P Association in 2000 and later of FIPPA – International P&P Federation in 2006.

In 2009, he founded together with Spain, Portugal, San Marino, Denmark and France, the IPPA – International P&P Association, being its President since 2016.

He is undoubtedly one of P&P’s most important personalities, not only in Italy but worldwide as well.
Carlo Farioli is the “P&P man”.

A Gold Trophy, the FARIOLI AWARD, is instituted by IPPA, and will be awarded annually to the players ranked number one, in the WPPAR men’s and women’s ranking, as of December 31.

The IPPA will also study the possibility of awarding a monetary prize to the top 3 men’s and women’s ranking at the end of each calendar year, which prize will be made available to these players in the form of a subsidy to participate in competitions in the Official Calendar of the IPPA, during the following year.